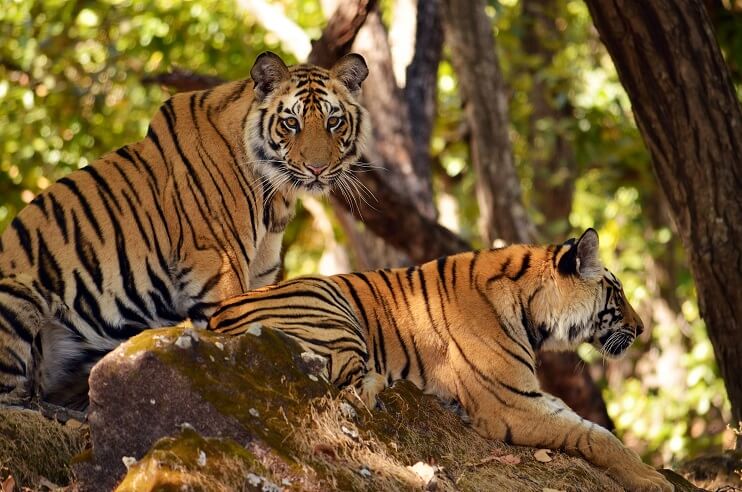 The state with third highest tiger population in India at 308 during a Tiger census in the year 2014, Madhya Pradesh has played a vital role in the tiger conservation in India. With its 6 tiger reserves, spread throughout the state, MP is also referred to as the tiger state because of its high density of tigers in India. A state where you can easily spot tigers roaming in their natural habitat, wildlife safaris have seen an increase in the footfall of visitors visiting tiger reserves in Madhya Pradesh.

Data is of tiger census 2014. The actual numbers may vary as per recent census.

After the initiation of Project Tiger in the year 1973 by Indira Gandhi led Government of India, 9 tiger reserves were created in India. In Madhya Pradesh, Kanha National Park was the first park to be declared as Tiger Reserve. Since then, 5 more tiger reserves have been added to the total tally of 6. Madhya Pradesh is an epicentre for tiger safaris in India, with the state being the third highest tiger populous state in India. Home to white tigers, Mukundpur has added another crown in the jewel of Madhya Pradesh. Panna National Park was also awarded the award of “most well-maintained national park in India”. 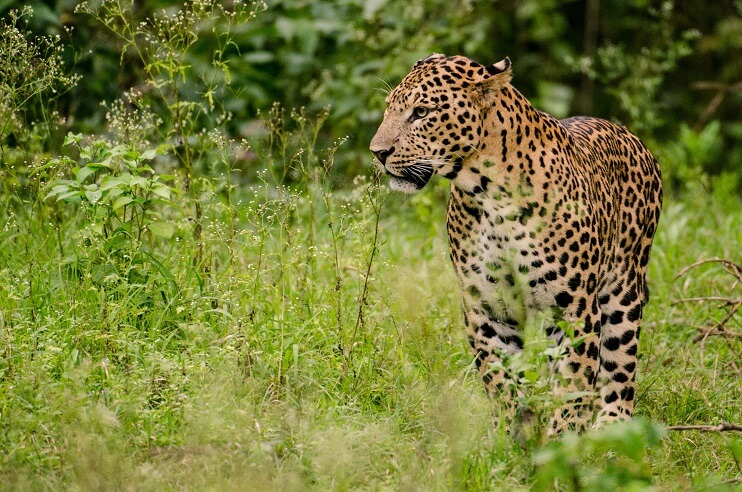 Indian Leopard is a leopard subspecies native to the Indian subcontinent. The species was declared as critically endangered in the country by IUCN Red List because of declining population, resulting from loss of habitat and human-animal conflicts. However, the success hasn’t come easy. Cases of poaching have been increasing in and around Madhya Pradesh. With conviction rate of 5% in the state, poaching was going rampant. In the year 2018, Madhya Pradesh witnessed 37 leopard deaths. Many reasons were attributed for the deaths of leopard in the state, majorly focusing on linear infrastructure and increasing human-animal conflicts.

However, the picture hasn’t always been this rosy. In the year 2014, a published report placed the leopard deaths to around 60 in three years. The report estimated that if no action plan is implemented, the state might soon lose the entirety of its Leopard population. The constant efforts of conservationists and help from the government ensured that the state government ensures the presence of healthy population of Leopards in MP.

Achievements of Leopard conservation in MP

Failures of Leopard conservation in MP 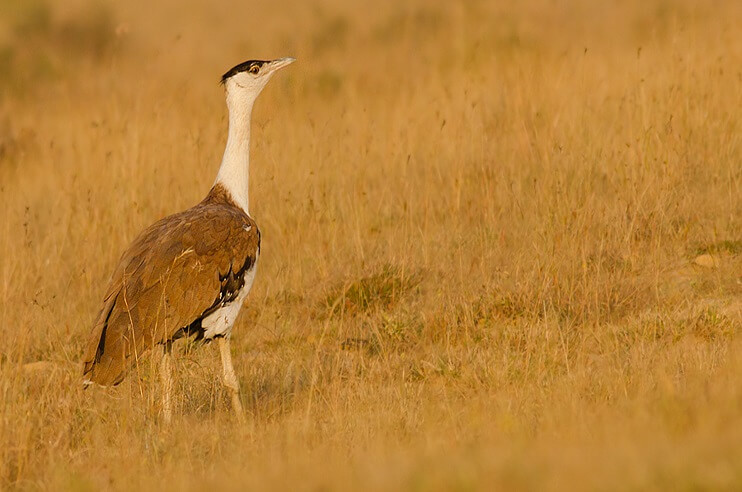 A bird which was once taken into consideration for being the national bird of India, today stands on the brink of extinction. Great Indian Bustard or Indian Bustard, a species native to the Indian subcontinent, was known for its ostrich-like appearance. A bird which had a total population around 1200-1500, today the population is reduced to 150 odd.

The bird species were found in the states of Maharashtra, Gujarat, Andhra Pradesh, Madhya Pradesh and Rajasthan. Madhya Pradesh was home to the majestic bird, however, rampant poaching and shrinking natural habitat led to the total extinction of GIB population in the state. The bird species was declared critically endangered in the year 2011, after the loss of 90% of the total bird population.

Madhya Pradesh has two wildlife sanctuary which were famous for their Great Indian Bustard population. Karera Wildlife Sanctuary and Ghatigaon Wildlife Sanctuary were the two designated sanctuaries for the endangered Great Indian Bustard. However, the parks are about to be decommissioned because of no GIB sighting in over a decade. The government of MP tried to repopulate the state with two GIB, however, there was no follow up on the same.

Failure of GIB conservation in MP 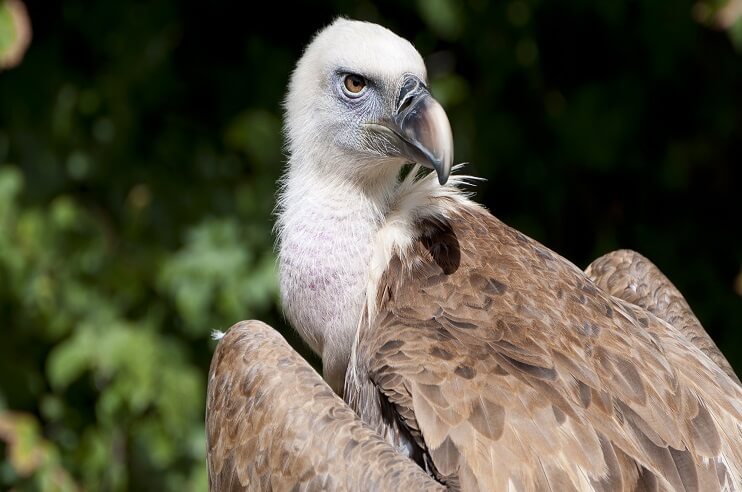 A bird species which used to rely on human population for its survival in India almost came back from the gates of extinction. Part of the natural animal disposal system, the first decline in the population was noted in the 1990s by Vibhu Prakash. The rapid decline caught the attention of many international scholars. While many attributed pesticide poisoning, bacteria and industrial pollutants as the reasons for the population decline, Dr Lindsay Oaks’ report proved helpful in tackling the crisis.

In the report, it stated that Diclofenac is the major cause for the decline of the population. Diclofenac is an anti-inflammatory drug given to livestock and is used to treat symptoms of fever. The drug was fatal to the vulture and if consumed through the carcass of livestock, could prove fatal to Vultures. The newly available information helped in presenting the case for banning the drug for veterinary use.

The population of the big bird was estimated around 40 million in 1990 to a few thousand in the early 2010s. However, during the recent survey in the year 2015 and now in the year 2019, the results have shown a positive result. Although the results are far from restoring the actual vulture population in the state, the rise has come as an inspiration for activists.

Achievements of Vulture conservation in MP

Once a thriving species found in the rivers across India, Gharial saw itself in shallow waters with depleting population. The fish-eating reptile faced serious survival challenged with the construction of dams, depleting fish population and getting trapped in fishing nets. Once found in abundance, the population was reduced to odd 300-400 by the year 1979. It was in the year 1979 when the Gharial conservation mission began in the Chambal region. A species that was widespread throughout the Ganga river to Indus river in Pakistan to Irrawaddy river in Myanmar, by the year 1976 the population was reduced to 2% of its historic tally.

The extensive conservation efforts and proper safeguards ensured that the imminent threat of extinction is averted. Then came the challenge of repopulating. Madhya Pradesh has played a major role in repopulating the species throughout the Northern, Central and Western India. Today the reptile population has increased to more than 1680 Gharials in the Chambal Sanctuary area alone. An increase of 426 Gharials was reported for the year 2017-2018, highest for any year.

However, the achievement wasn’t easy to come by as the authorities witnessed a sudden death of 100 Gharials in the year 2008, which put the conservation efforts under scrutiny. But the record increase in the population is a big boost to conservationists who have ensured such a result. Son Gharial Sanctuary is another destination to witness the majestic creature. Son Gharial Sanctuary along with Chambal Sanctuary alone has ensured a healthy Gharial population, some of which are being transferred to other regions to ensure even distribution.

Achievements of Gharial conservation in MP Barasingha, a.k.a Swamp Deer is a deer species which is majorly found in the central and northern India. Native to the Indian subcontinent, the deer is recognized by its antlers, which carry more than 3 tines. The meaning of the name Barasingha implies the presence of 12 tines on the antlers, some are even recorded with 20 tines.

A majestic animal which was historically found in the base of Himalayas, from Assam to west of Jumna river, in few places of Indo-Gangetic plain and locally between the areas of Ganga and Godavari. A critically endangered species, Barasingha flocked the grasslands of Northern India witnessed a battle of survival with rampant poaching and hunting. Another challenge it faced was the decreasing natural habitat. In 1960, the total population of Barasingha was estimated around 1600, after facing a drop from 2150. The population saw a continuous decline because of no conservation policy.

Achievements of Barasingha conservation in MP

The state has been a hotspot for many wild species and the government has been extensively working to conserve many other species too. We would like to congratulate the state and conservationists for their contribution to these conservation programs.