Tiger population in India has always been a major concern. So far till the month of May, we all have been hearing about the disheartening news on tiger deaths in India. Who knew the Global Tiger Day 2019 will bring along a good piece of news. Yes, on this very day Prime Minister Narendra Modi announced about the doubled tiger population from 1,411 in 2006 to 2,967 in 2019. This news was revealed from latest tiger census result for 2018 and Madhya Pradesh, one of the tiger states of India is topping the list with 526 tigers in the wild. With this the popular Panna Tiger Reserve sees the population of big cats growing from 0 to more than 50 over a decade.

Once completely devoid of the big cats, Panna Tiger Reserve located in the Panna and Chhatarpur districts of Madhya Pradesh has scripted a remarkable turnaround in tiger population, taking the number to more than 50 from 0 in over a decade. This is a ‘Good Sign’ for sustainable tiger conservation efforts which encourages preservation of these big cats.

Also, the answer to the question- how many tigers can be sighted in Panna Tiger Reserve, is all-in-all 52.

In Case You Didn’t Know 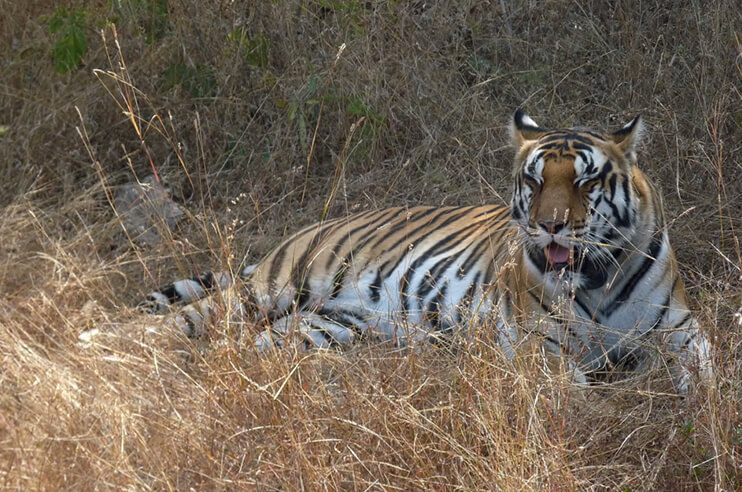 Panna Tiger Reserve started the Tiger Reintroduction Project a decade ago, i.e., in the year 2009 to get back these majestic big cats in the wild. This initiative was taken with 7 tigers: 5 females and 2 males that were brought from Kanha and Bandhavgarh, the other two renowned national parks of Madhya Pradesh. And now the result is here with a total number of 52 tigers along with cubs roaring in the reserve.

In regard to this, Mr Bhadoriya, the field director of Panna Tiger Reserve is of the opinion that no such attempt across the world has brought this kind of result and why not, after all a unique conservation effort in Panna Tiger Reserve made that is worth praising. He also added, the present status of tiger population in the park is healthy and has almost reached the optimum level.

The Further Steps To Be Taken For Tiger Conservation in Panna

Now that Panna Tiger Reserve has an ideal number of tigers, the focus is on the management of adjoining forests and developing corridors to areas including Rani Durgavati Sanctuary in Damoh district and Nauradehi Sanctuary in Sagar district. The reason behind doing so is to stop tigers from venturing out in search of new habitats.

Currently tigers are making their territories all across the national park and cubs are growing up in a natural environment making tiger sighting possible for wildlife enthusiasts. In addition to this, nature camps were organised in the tiger reserve to make people aware of the importance of tiger existence and forest conservation in Panna.

When it comes to wildlife of India, Madhya Pradesh is immensely blessed. Of all, Panna National Park is one of the popular parks amongst the travellers. Established in the year 1981, the national park was declared a Project Tiger Reserve in the year 1994 by the Central Government. An interesting fact about the park is that it was recognized as the best-maintained park in the year 2007 by the Tourism Department of India. Tourist planning to visit Panna National park, will get an opportunity to witness the best of flora and fauna by enjoying both boat and jungle safari. The park is even an ideal bird watching destination and one can spot more than 200 species of birds including migration birds. The top birds tourists can spot are paradise flycatcher, blossom headed parakeet, white necked stork, salty headed scimitar babbler, honey buzzard and more.

Even though Madhya Pradesh lost its coveted status in the year 2010 but has reclaimed the tag as ‘India’s Top Tiger State’ in Tiger Census 2018 Result. All thanks to the continuous efforts of the tiger conservation and authorities in charge working round the clock to preserve the endangered species. We hope to hear more such heart-warming news in the near future.